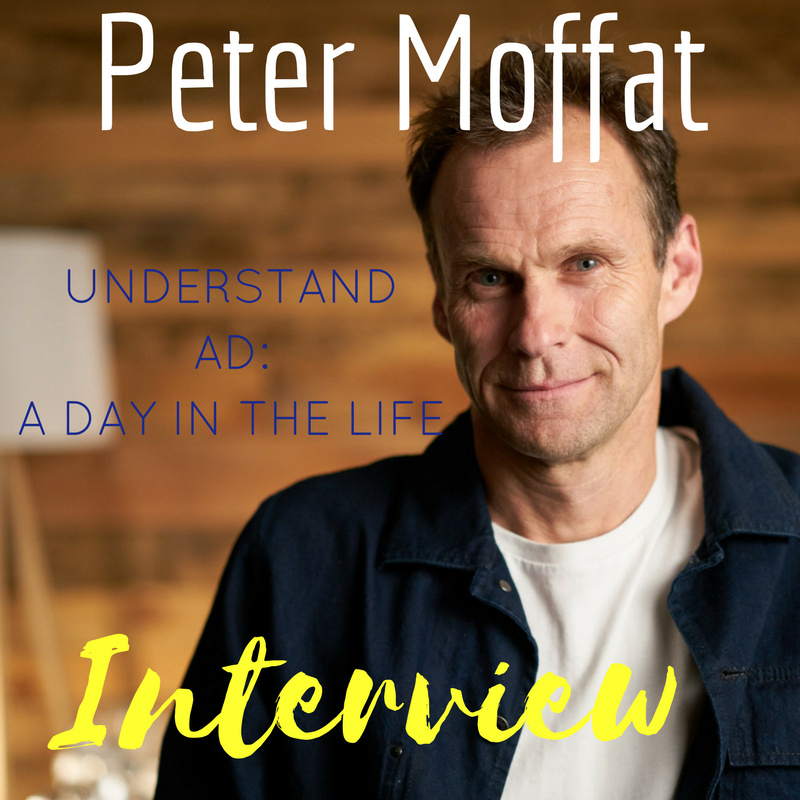 *Fun Fact: Peter was an Army Brat and move to a new country every two years when he was younger.
His Favorite Tweet: “The Night Of is a story about a guy with eczema, with a murder subplot”
Peter’s Story: I first got AD when I was 5, so I’ve lived with it for half a century now. I remember going to the doctor with my mum and the doctor really looking like Sean Connery and thinking this is great! James Bond is going to know the answer. He [the doctor] said, “Its infantile eczema and its going to go away.” Wrong diagnosis! 50 years later its showing no signs of going away. So either James Bond was wrong or I haven’t grown up yet, one of the two. So I wanted to write about it.

Are you currently dealing with atopic dermatitis right now and if so, what are you doing to manage it?

I have severe AD on my feet. Its actually not too bad right now at the moment.

My own personal example of that kind of thing is – when my feet are in really bad shape and I can’t scratch them anymore than I scratch them and the itch is still there, I go upstairs to the bathroom and I run boiling hot water over them. And for some reason that kind of helps the itch. Its soothing in some weird way.

My children kind of like – they say “dads going upstairs to burn his feet.” I sort of love that they say that in a funny way, because although its like a really weird thing to say when you think about it out of context and isolation. Actually its great because they’re treating what I’m doing as completely normal in our lives. They’ve normalized something that is abnormal and that’s great. I really love that. The more that we can get people to see this is what you have to do, this is what we do, then that’s a good thing I think.

Does anybody in your family suffer from AD or have any symptoms such as allergies or asthma?

Nobody before me, which is interesting and unusual. I have a bit of hay fever but nothing to talk about. I don’t have asthma. One of my daughters has a little bit of AD, but nothing significant.

Weirdly, my wife had a little bit of AD but not serious, and then she had a baby and it went away. Which is interesting. It makes you think about hormones and what that does and doesn’t do. Its interesting though.

A lot of people that have AD hold themselves back and prevent themselves from pursing their dream. You were a former barrister and now a BAFTA award winning writer. What allowed you to pursue your dreams and not hold yourself back, like many do?

That’s a really great question. The honest answer is that I spent some of the time covering it up. You know, doing what one shouldn’t be doing.

When I was at the criminal bar appearing in court everyday I used to – I used to wear gloves in court to cover my AD up. My AD was on my hands.

I worried that juries would be looking at my skin disease, rather than listening to what I was saying on behalf of my client. Which is not good for the client or me.

So I used to wear gloves.

In Britain, as barrister you wear wigs and gowns and all that paraphernalia. So wearing white gloves looked like part of the uniform, but I did cover it up. I mean I understand why people do that, I understand why I did it. I try not to do it now.

People definitely look at my feet. I’ve been on the London Underground – on the tube. I’ve had parents move their children away from me. Which I used to think was about them not wanting their children to look at something as ugly as my feet. But, I think actually may well have been in lots of cases that they thought possibly it was contagious. That their children might catch something from me.

To think about that now, to think that there are people in 2017 that actually believe that this skin disease is something you can catch is desperate. I can’t believe it. If there’s one reason for doing this, what I’m doing now – is trying to get people better educated about it. You can’t catch it from anybody.

People are so poorly educated about it and I’m just trying to change that.

Why do you think AD as a skin condition is undervalued, since there’s very little representation and doctors are stumped on finding a cure?

Well it doesn’t kill you! It can feel like you’re living in hell, but it doesn’t kill you. And I suppose essentially that’s the bottom line. But I think that’s going to change. It is changing. That’s a part of the point of this program. We’re looking at something that is undervalued and trying to value it much more. Much more prominence, much more awareness in the world.

But I think that’s something you can change. I really believe you can change perceptions. It’s remarkable to me the response from only a television program, but the response that I’ve had gives me real hope – real optimism that we can get there.

What would you say is the number one thing about AD that frustrates you, besides not being able to cure it?

Its chronic nature. Its ever presence. The fact that it’s in your life all the time. I supposed I don’t want to moan about it too much actually. It’s not great, but it’s ok and I’m lucky in lots of other ways. I don’t want to be a complainer about it because there are lots of people who suffer from a lot more difficult things already.

I’m most frustrated by the misunderstanding and the failures to comprehend what it’s about. The lack of education that’s not available to people. If there are 1.6 million Americans who suffer from moderate to severe AD, which there are – it also means lots of those people have families, partners, children all around them, they’re also connected to this disease.

It’s a bit depressing, but it’s good because large numbers are powerful. It’s a powerful force for change.

What was the conversation about AD like with your wife, while you were dating her?

I was her first boyfriend. So she has no other experience of boyfriend life with somebody with AD.  [laughs]. I suppose once I got my clothes off, once… it was all ok. She’s a great person and a wonderful woman. She goes to bed with me every night with my skin disease and that’s great.

But she did say once as she was just falling to sleep, “Oh keep your feet away from me.” We’ve been married for 25 years and that’s the only memory I can think of. And I thought, God if I’d been less lucky or had lots of girlfriends with different attitudes, then life would have been really hard.

Can you name something positive that you have gained from eczema?

I suppose the cheesy answer to that is – I just think oh ‘fuck it’. I’m gonna wear flip flops in the middle of winter and people can bloody look at my feet. I’m sorry I’m swearing a lot. I just don’t care, because it’s good for my feet and they can live with it. I suppose its given me a kind of… certain strength actually, funny enough. I don’t know if I’d applied that strength elsewhere in my life, but it certainly specific to the disease.

Maybe that gives you some kind of inner strength. Maybe you can apply that somewhere else in your life as well actually.

Recently, I attended an Eczema Forum in the city where people had tears in their eyes from frustration. What advice or words of encouragement would you give them?

It’s not a simple answer, but I think the first thing to say is that there are places you can go for help. You can also go to the website https://understandad.com/ it’s a great resource that will really help people.

Know and understand that there are lot of us, a real large number of people who suffer from this disease. There’s a strength in numbers and a strength in us all being together. Look and find where you can get help because it is possible.

Will you be writing anymore storylines or characters that suffer from AD in the future?

That’s a great question. We don’t know yet whether there will be a second series of The Night Of, but I hope that there might be. And if there is, I hope that John Turtorro’s character appears in it. And you won’t be surprised to hear that if he does, his AD won’t have gone away. That character will be returning.

The only trouble is, once you’ve done it once, they say “oh that guys writing about AD again – ya know, give me a break. We’ve done that.” Which is really quite annoying but I’ll find ways to talk about it. This is great.