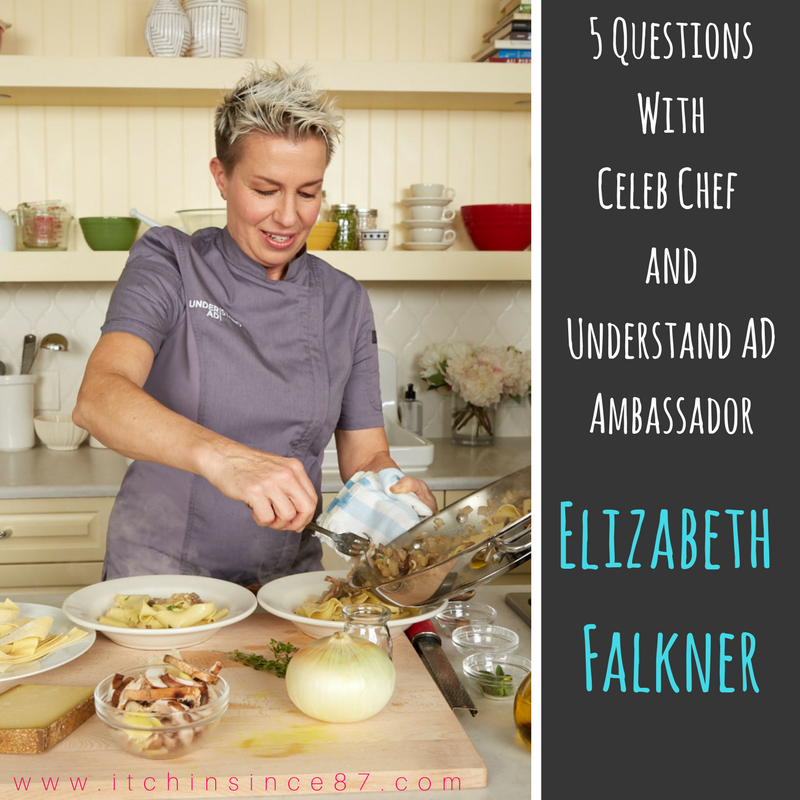 I’ve attended so many charities helping people with difference causes. So when I was approached by Understand AD, I was thrilled to help my cause and those suffering from the same condition.  ~ Elizabeth Falkner

Elizabeth comes from a very artistic family, and she previously worked in TV production creating abstract films. Although once she got a taste of the California and more specifically San Francisco culinary scene, that was a wrap (pun intended) for film. Slowly transitioning herself out of film she’s worked her way up the ranks in the culinary scene.

She appeared on multiple tv shows…

Oh and published two cookbooks called Demolition Desserts and Cooking Off The Clock.

Not to mention she was nominated for a James Beard Awards, which is the Oscars of the culinary world. Ummm… can we say I-M-P-R-E-S-S-I-V-E!

But while Elizabeth was busy creating demolition desserts, her skin was doing a little demolition of its own. Suffering for twenty plus years, Elizabeth has recently opened up about her atopic dermatitis.


For those that don’t know, hearing about a chef having atopic dermatitis is extremely RARE! Think about having a deep paper cut and then squeezing lemon juice on it. Well, welcome to cooking with atopic dermatitis during a flare-up. Now, unless you are a masochist, cooking with a skin condition can be pure torture! Luckily, none of this mattered for Elizabeth, who’s love of food allowed her to persist on.

I recently had the pleasure of speaking with chef Elizabeth Falkner in a 5-question interview about her life with AD.

A: As someone who loves cooking, I always find that my hands break out from washing them constantly after touching foods and from dishes. What would be a helpful tip to control the breakouts on my hands?

EF: Working non stop in the restaurant world – its almost impossible. Let them rest and try to recover, because it’s so stress related. What helps me manage my skin is exercise. Oh and make sure to avoid some things [certain foods] that will make it worse.

A: After reading your bio and seeing the multiple restaurants you opened, and being nominated for a James Beard Award, where does your drive come from? (I ask this as someone who’s let my atopic dermatitis get the best of me at times)

EF: Its different for everybody. I had it on hands, legs and the backside of shoulders. I was lucky to never have it on my face. It would drive me crazy! What helped determined me to be a success was my type-A personality and the thrill of a challenge.

A: How did you not let AD get in your way?

EF: I was not going to let it stop me. I knew I was talented. I knew I wanted to do this. And I knew I could do this. I wanted to have good life. Life is just challenging in general and there are pros and cons to everything, because thats life.

A: I know you lived in the San Francisco / Bay Area and moved to New York a few years ago. Has has the change in locations affected your skin due to different weather?

EF: Weather change affected my skin more in NYC. Especially In the winter when it gets really dry. Thats a tough time on my skin. I recently had an outbreak and I’ve been taking epson salt baths. It doesn’t make it go away but it really helps soothe the pain.

A: Best Advice you ever received?

EF: Best advice – to talk about it. This is something I never felt comfortable talking about. I love the outdoors and I’m a very Californian person. But there are times you have to explain yourself sometimes. The hardest part about it is not only you dealing with it yourself, but then having to explain it to other people.


To find more information about Understand AD check out https://understandad.com/

Also, for more info on Chef Elizabeth Falkner, check out her site –http://www.elizabethfalkner.com/home

* Special thanks to Elizabeth for allowing me to interview her!